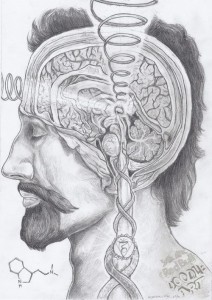 While the physiological function of the pineal gland has been unknown until recent times, mystical traditions and esoteric schools have long known this area in the middle of the brain to be the connecting link between the physical and spiritual worlds. Considered the most powerful and highest source of ethereal energy available to humans, the pineal gland has always been important in initiating supernatural powers. Development of psychic talents has been closely associated with this organ of higher vision.

The third eye controls the various bio-rhythms of the body. It works in harmony with the hypothalamus gland which directs the body’s thirst, hunger, sexual desire and the biological clock that determines our aging process. When it “awakens”, one feels a pressure at the base of the brain.

The pineal gland’s location deep in the brain seems to intimate hidden importance. In the days before its function as a physical eye that could see beyond space-time was discovered, it was considered a mystery linked to superstition and mysticism. Today it is associated with the sixth chakra.

N,N-dimethyltryptamine, or DMT, is an illegal, psychedelic, tryptamine compound found in the human body and at least ~60 species of plants worldwide. Rick Strassman, M.D., described it as “the first endogenous human psychedelic” in DMT: The Spirit Molecule (2000), and in an interview in 2011 said that DMT “seems to actually be a necessary component of normal brain function.” Terence McKenna (who, “more than anyone,” Strassman wrote in 2000, “has raised awareness of DMT, through lectures, books, interviews, and recordings, to its present unprecedented level”) called DMT “the most powerful hallucinogen known to man and science” and “the commonest hallucinogen in all of nature” in his 1994 lecture “Rap Dancing Into the Third Millennium.” McKenna wondered why theology had not enshrined DMT as “its central exhibit for the presence of the other in the human world,” and said:

Why this is not four-inch headlines on every newspaper on the planet I cannot understand because I don’t know what news you were waiting for, but this is the news that I was waiting for!

The Pineal gland will naturally make its own DMT when fully operational and we will be able to remain in a visionary state most of the time. An awakened pineal gland brings the ability to consciously astral travel, explore other dimensions, foresee the future and receive communications from loving dimensional beings. DMT is a component of Ayahuasca – a plant medicine from the Amazon that brings profound physical and heart healing through its purgative effects and the perception of other dimensions.

Those that use this medicine go into a period of “work” where issues come into awareness and can be healed with the insights that come from DMT consciousness. The advantage of cleaning up our pineal gland so it makes its own DMT is that we can be in a continuous state of spiritual “work” and we are spared the purgative effects of drinking the ayahuasca.  Thus we no longer need any medicines as an adjunct to our spiritual lives. DMT is a totally natural substance that the human body will manufacture and distribute when it is in a healed state. Thus it would appear human beings were intended to be visionary beings and be able to tap into the information in other dimensions. This dimensional perception transcends the ego and rapidly heals our sufferings, conflicts and thus karmas.

How to clean your Pineal Gland.

1. Mercury – this is really bad for the pineal gland. It’s poison. Don’t let this get into your body. Mercury tooth fillings are pineal toxins. Have them removed. All medical vaccines are also mercury tainted. Thimersal (a vaccine preservative) is methyl mercury and is very difficult to get out of the brain once it’s in there. Avoid eating fish and bottom feeders such as shrimps and prawns. Tuna and dolphin meat is particularly bad for mercury – the bigger the fish the higher the concentration of mercury in its body tissue. Eco light bulbs – if one is smashed mercury vapour is released into the room and inhaled. Avoid at all costs breaking one indoors. Mercury can be removed from the body by the daily use of chlorella, wheatgrass and spirulina. Cilantro herb taken daily can help remove mercury from brain tissue.

2. Fluoride – in toothpastes and tap water. It’s another heavy duty poison. Avoid it at all costs. It calcifies the pineal tissue and basically shuts the gland down.

3. Organic foods – some pesticides are pineal toxins. Organic healthy food with a high ratio of raw is supportive to pineal detox. Meat is not helpful either. Some people who channel seem to not be affected but for many the toxicity and density of meat will pose challenges and we want to make the work easy if we can.

4. Alcohol + smoking – Naturally these need to go along with the emotional attachments to using them (usually boils down to self worth issues or unresolved trauma).

5. Heart Healing – raises the overal vibration of the being and heals fear – a useful advantage for when we start seeing other dimensions.

6. Other toxins – if something is toxic do not put it in your body. If you can’t say it’s name, is most likely bad. Toxins include artificial sweeteners (aspartame K) , refined sugar, phylenanine (in squashes), E numbers beginning with 1, deodorants, cleaning chemicals, dental mouthwashes (saltwater is suffice) and  air fresheners.

7. Raw chocolate – Raw cacao is a pineal gland stimulant / detoxifier in high doses because of the high antioxidant content.

Being disciplined with steps 1-6 for a year or so will certainly bring about pineal awakening.

Step 7 is optional but very useful too.

Some of our Posts